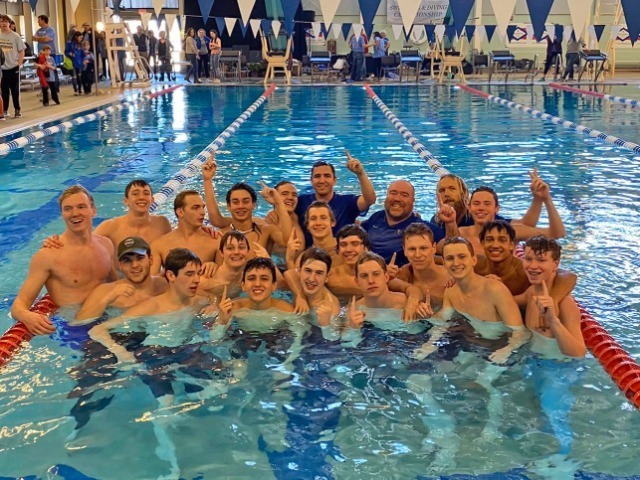 
The Conway Wampus Cats boys swim team finally captured the elusive state title that had avoided them for 32 years.
The Wampus Cats have came so close in previous years, but couldn’t fully grab the rope as the team finished as a runner-up the last two years, while the team finished third three years ago.
Conway swim coach Craig Conner said he has “16 silver trophies in (his) office that represented all the times that the boys and girls teams have come so close to winning it all.”
For these current Wampus Cat seniors, the team has experienced heart-breaking defeat three times and finally got over the edge with the state championship.
"I am overjoyed for our seniors,” Conner said. “This group has battled and came up short for the last three seasons. We have experienced a lot of heartbreak and disappointment together. This team is a true testimony to the fact that hard work, perseverance, dedication and teamwork will eventually pay off. This is a life lesson that I hope they will all carry with them for the rest of their lives. I know that I will."
While the writing may not have completely been on the wall for a Conway state title this season, the Wampus Cats showed they would not go down without a fight at this year’s state meet.
In 11 total meets, Conway scored a first-place victory in all but two meets.
The Wampus Cats finished as a runner-up against Little Rock Central on Jan. 11, while finishing third behind the two Bentonville teams at a Bentonville meet Dec. 6.
After that Jan. 11 second-place finish at the Tiger Invitational at the University of Central Arkansas, Conway rolled in six straight meets to secure the 6A Central Conference championship and the 6A State Title.
But, the journey to this year’s title began last spring with a number.
"Last March, after our second consecutive state runner-up finish, I wrote the number 450 on the board,” Conner said. “I told the guys this is how many points we need to win next year. I asked them to do their part to get us to that number. The boys bought in and pushed each other all year. We didn't quite reach 450 but 436 was enough to bring home the gold trophy.”
That 436 mark was enough.
In fact, it was 55 points higher than second-place Central High, the team that Conway came behind in one of the regular season meets.
It was also the team that Conner said would pose the biggest challenge after the Tigers won the previous two state titles.
In the end, it was Conway that lifted the 6A banner and trophy.
That trophy will forever be locked into Conway High School swimming history.
Conner said he couldn’t coach his team without help from other coaches.
"I would be remiss if I did not acknowledge my incredible coaching staff that helped make this possible,” Conner said. “Former head coach Christina Rye laid the foundation these past few years to put us in this position. I have three outstanding assistants in Kent Manion, Chris Brynell and Jordan Bell who all bring unique strengths and expertise to the team.
“I also need to recognize the Aquakids club swimming coach Steve Hall who trained our club swimmers while providing valuable coaching guidance to me. My coaching philosophy is to surround myself with people smarter than me so they can make me look good.”
Senior Ty Wingfield set the state record in the 50-yard freestyle with a time of 20.36 seconds.
Wingfield was also a part of the boys 200 freestyle relay that set a state record with a time of 1:24.70.
The team included junior Duncan Troup, sophomore Jordan Mosby and senior Ethan Marotte.
The Conway girls team finished in fifth place, while all-state swimmers are senior Emily Holman, junior Jameson Tankersley, senior Adrienne Robinson and sophomore Brooklyn Anderson on the girls side.
Boys all-staters are Wingfield, Mosby, Troup, Marotte, freshman Andrew Rogers, senior Gavin Teague and senior Jeremy Bloomfield.