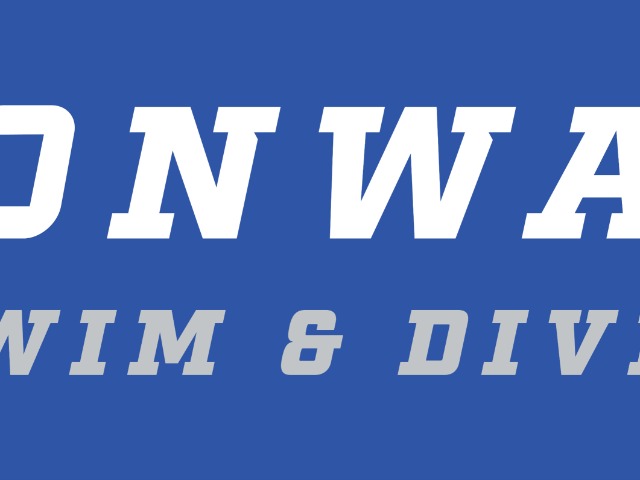 Now on the heels of a successful regular season campaign, the Conway High School swim team has its sights set on a bigger prize, the state championship.
It’s been 32 years since a state championship banner was raised at Conway High School and it has been something that has eluded the high school several times, falling just out of the reach of the team.
“Our boys team has been state runner-up two years in a row, with a close third-place finish three years ago,” Conway swim coach Craig Conner said. “We currently have 16 silver trophies in my office representing all the times both the boys and girls teams have come so close to winning it all. We have a great group of seniors that have felt the agony of defeat these last three years.
“These boys have worked extremely hard to put our team in this position, and I would love nothing more than to send them off with a taste of victory. The last boys state championship was won by a team led by legendary coach Bob Courtway in 1988. For our team to accomplish something that puts my name alongside his would be incredibly humbling, and would be something I would treasure the rest of my life.”
With seven first-place finishes out of nine events, the state title could be on the horizon for Conway.
The two non-first-place finishes were a second- and a third-place finish.
In the third-place finish, Conway finished behind the two Bentonville High Schools at the Bentonville West Invitational.
However, it was the team that finished ahead of Conway at the Tiger Invitational at Little Rock Central that Conner said could be the biggest competition in the way of the state title.
“Little Rock Central has won the last two boys state championships and have a strong team again this year,” he said. “The conference meet will be at their home pool at UALR so we have to prepared for an unfamiliar environment. Bentonville always puts a great team in the pool so we have to be ready for them as well. The state meet is in Bentonville which requires on overnight stay which brings its own set of challenges.”
But, despite that regular season dominance, Connor said the focus hasn’t necessarily been on the meets throughout the season.
“Swimming is a unique sport in that my eyes are always focused on the conference and state meets,” he said. “This means that rarely do we go into a regular season meet with everyone swimming their best events. All team members need to get seed times in each of the eight swimming events so that we will be ready to put our best team in the pool at conference and state. Our finishes this year are a testament to the hard work and dedication of both the boys and girls teams. My mantra this year has been “every point, every race, every meet.” This means that for us to be successful, the swimmer who finishes 16th in the 500 freestyle is just as important as the one who finishes first in the 100 backstroke. Every point matters.”
With that in mind, before state competition begins Feb. 28 and 29 in Bentonville, the conference meet happens with Little Rock Central as the host at the University of Arkansas at Little Rock.
But how does the preparation for each meet change as the team moves closer to conference and state meets?
“As we move towards conference and state, we begin to taper our workouts to help our athletes to be at peak performance for competition,” Conner said. “Some of our swimmers who participate in club swimming train with the Aquakids during the evenings. The rest of the swimmers, along with our divers, train at UCA each afternoon.”
But, Connor believes his Conway team has an excellent chance to win conference.
“The last time the boys won the conference championship was 2017,” he said. “The girls won conference in 2019 in a surprising upset over Little Rock Central. Winning a championship at any level is special. For our boys team, winning conference this year would be the first step towards accomplishing the elusive goal of winning the state championship.”
Conor also mentions how the team has grown over the season.
“I have seen tremendous growth throughout both the boys and girls teams this season,” he said. “One specific group that comes to mind is our diving team. We returned two key members from last year in Cade Robinson and Cullen Odom. Because you can enter four divers in a meet, we needed to find two more. Freshman Aiden Bird has been outstanding and looks to make a strong showing at conference and state.
“For the last spot, juniors Joshua Taylor and Cameron Summers have been pushing each other all year. For both of them this is their first year to dive. I am very proud of both of them for working hard and truly being ultimate teammates. On the girls side, freshman Lily Douglas is our only diver and looks to make some noise at the conference and state meets as well. This is a very difficult event that takes a lot of bravery, hard work and determination.”
The conference meet is Feb. 13 at UALR and then the state meet happens on Feb. 28 and 29 in Bentonville.