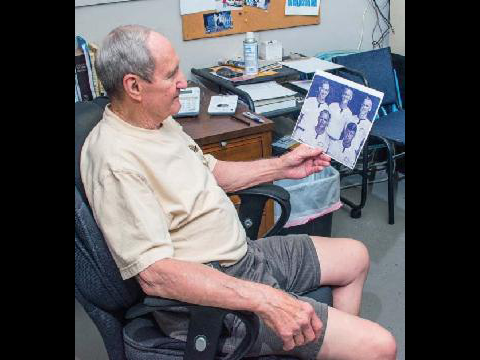 Dennis Fulmer of Conway was going through some old photos when a group shot of his 1968 Conway High School football coaching staff struck him.

All five in the photo — Fulmer and his four assistants — had gone on to be inducted into at least one hall of fame each.

“I just saw that picture, and I remembered what a good staff it was, all the good staff meetings we had, how everybody got along,” Fulmer said. “It’s a highlight to have that good a coaching staff. You don’t realize how good a staff that was until you get away from it.”

That staff included some of the legends of Arkansas high school football coaching:

Fulmer, now 81, was the Wampus Cat head coach from 1967-70 before becoming the first full-time athletic director in the school’s history. He has been inducted into the University of Central Arkansas Sports Hall of Fame and the Arkansas Track and Field Hall of Fame.

Joe Fred Young, 73, was offensive coordinator. After a distinguished coaching career at Fort Smith Northside, he is a member of the Arkansas High School Coaches Association Hall of Fame and the UCA Sports Hall of Fame.

Ernie Miller, 74, was defensive coordinator. He has been inducted into the UCA Sports Hall of Fame and the Arkansas Track and Field Hall of Fame.

Bernie Cox, 72, coached offensive backs and special teams. He went on to a 35-year tenure at the helm of Little Rock Central High School and is a member of the Arkansas Sports Hall of Fame and the Harding University Athletic Hall of Fame.

Johnny Simmons, 73, coached defensive backs and special teams and is a member of the UCA Sports Hall of Fame.

“I got to select them, but I pretty well knew them,” Fulmer said of his coaches. “I knew Joe Fred most of his life, and Bernie was my quarterback at Jacksonville, and I knew him quite well. I knew Ernie from when he was in college [at UCA].

While the staff eventually moved on — Fulmer became Conway athletic director before going into private business; Young succeeded him as head coach for a year and later took Cox with him to Little Rock Central; Simmons went on to a 45-year career in banking, real estate and insurance; and Miller retired after 38 years in school-equipment sales — all five recall their common Conway experience fondly.

“Those four years meant everything in the world to me,” Cox said. “That four years there and the three years I was with Joe Fred [as an assistant] at Central set me up for whatever I’ve been able to do. The four years at Conway gave me the background I needed, and I needed it badly.

“The kids were so good to coach, and they were disciplined. That was a good community with good people, and those four guys, they took care of me.”

He said he played quarterback for Fulmer at Jacksonville from his freshman through senior seasons.

“[Fulmer] was one of the reasons I went into coaching,” Cox said. “I had graduated from Harding in 1966 and was coaching at Searcy when he had an opening and called me, and boy, I jumped on that. The staff over there — Joe Fred and Johnny and Coach Fulmer and Ernie and C.D. Taylor (another Hall of Famer who was the Wampus Cats’ basketball coach) — was so good, and I learned a lot about kids and coaching and football the four years I was there.

“It was the hardest thing in the world for me to leave after four years and go to Little Rock with Joe Fred. That was a wonderful, wonderful period of my coaching life. And I still have a love in my heart for Conway. I’m still for Conway in everything they do, athletically and as a community.”

Young joked that he “had to choke Bernie to get him out of Conway.”

After Central, Young coached two years under Broyles, then decided to return to high school coaching. He spent four years at Fayetteville before landing at Northside, where he took the Grizzlies to eight state championship games during his 1981-98 tenure and won the title in 1987.

“I learned everything from Dennis,” Young said. “The thing I got most from him was how to deal with people and with kids. He was absolutely marvelous.