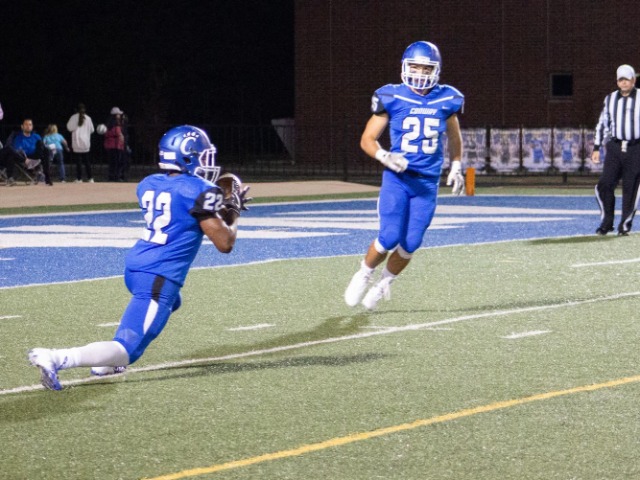 The Wampus Cat Football team was riding a 4 game win streak going into Fridays match-up against Bryant. As Bryant wrapped up their senior night festivities, the pressure was on. The winner of this game would earn a first round bye and the 2 seed in the 7A state playoffs.

Conway received the opening kickoff, but the offense didn’t amount to much on the first drive as they were forced to punt. Bryant marched down the field on the following drive, scoring on a 24 yard run from running back Latavion Scott. Neither offense produced much the rest of the half. Scott added another score on the ground with 1:12 left in the half, putting Bryant up 12-3 at halftime.

The second half would turn out to be a nightmare for the Wampus Cats. Bryant would score on their opening drive of the half, thanks to another touchdown run from Latavion Scott. On the ensuing drive, Conway quarterback Jovoni Johnson would throw an interception that was returned 70 yards for a touchdown.

The only second half points for Conway came early in the fourth quarter on a 25 yard touchdown pass from Jovoni Johnson to wide receiver Nick Richmond. Bryant would score on the next drive, pushing the score to 40-10. Conway wouldn’t be able to get anything going offensively the rest of the game, dropping a heartbreaker to the Hornets.

The stat sheet for the Cats didn’t look like it has all year. Jovoni Johnson ended with 88 yards and a touchdown through the air, along with 21 rushes for 47 yards. Senior running back Cary McClain had his toughest outing of the year with only 34 yards on 10 carries. The defense surrendered the second most points they have all year. The Wampus Cats record fell back to (8-2, 5-2).