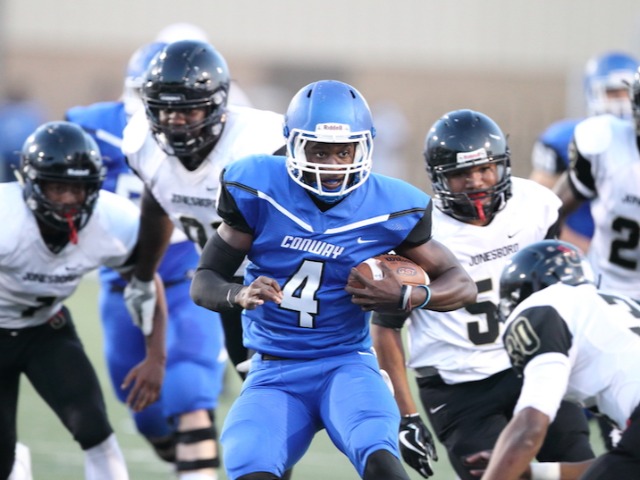 Sometimes the right mix of seniors and playmakers can lead to an unforgettable season. And that’s exactly what happened for the Conway Wampus Cats in 2017.

With the combination of a prolific running game (2,396 yards from Michael George) and an opportunistic defense (plus-10 turnover margin), the Wampus Cats clawed their way to the 7A semifinals for the first time since 2013.
With only seven starters back and a new head coach (Clint Ashcraft accepted Conway’s athletic director position earlier this year), change is afoot in Conway this fall.

Senior JoVoni Johnson takes over at quarterback. Johnson started several games as a sophomore and led the Wampus Cats to a playoff berth. Last fall, Johnson took snaps in rushing downs and also played some receiver. Senior Cary McClain takes over the majority of carries at running back after serving in the backup role a year ago. Senior Nick Tufu is versatile at fullback. Receiver Nick Richmond is back after a huge junior campaign. The senior hauled in 1,182 yards and 13 touchdowns last fall. Senior Will McKenna caught five touchdown passes a year ago.

“I think we are in for a treat watching Jovoni Johnson take over the reins for this team,” said Jeff Matthews, play-by-play announcer for Conway Corporation’s Channel 5 Sports. “He performed so well as a quarterback as a sophomore and then found himself all over the field in his junior year. There’s no reason why he shouldn’t be able to do a lot through the air also with the return ... Click here to read full article