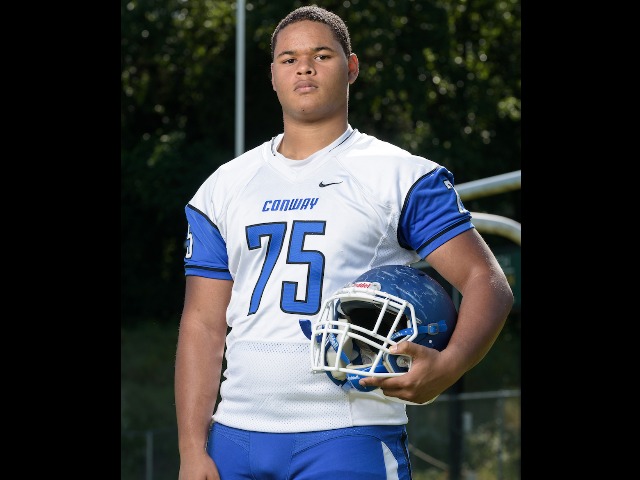 Heading into Week 6 in 2016, Nathan Turner and the Conway Wampus Cats were 0-5 as they visited rival Cabot. Conway stunned the Panthers, and the Week 6 win changed the course of Conway’s season.

As Cabot comes to town in Week 6 this year, Conway sits at 3-2 (1-1), and this match-up with the Panthers (4-1, 2-0) will be monumental to Conway’s playoff goals. Record wise, a lot can change in a year’s time, but as always with Conway and Cabot, the stakes are always the same — high.

“Cabot is a big time rival, and it always ends up being one of the most physical games,” Turner said. “We just want to go into this week with the right mentality and energy so we can come out with the win at the end of the night.”

Turner, a senior offensive lineman for the Wampus Cats, was selected to this year’s 501 Football Team — 25 players representing all 11 counties of the 501. The team, sponsored by Conway Ortho and Sports Medicine, Conway Regional Health System and First Security Bank, boasts the best the 501 has to offer both on and off the field. Turner was nominated by his head coach, Clint Ashcraft.

“Nathan doesn’t talk a whole lot, so when he does speak, his teammates listen,” Ashcraft wrote in his nomination. “He never gets too high or too low, and he is a calming presence to his teammates no matter the situation. He is a leader; he leads by example with great work ethic and discipline. He wants to be a great offensive lineman.”

Turner, who has started since the fifth game of his sophomore year, has put up some of his best work in his senior campaign. He and a talented offensive line have keyed an explosive rushing attack that has put up more than 1,000 yards in five games, including 891 yards from senior Michael George.

“Nate has done a fantastic job on the left side of the line,” said Jeff Matthews, Wampus Cat play-by-play announcer for Conway Corp 5 Sports. “He is a big presence over there and has helped keep his quarterbacks protected and create space for a rushing attack that is averaging six yards per carry. Nathan is a leader and has the respect of his teammates — exactly what you want and need from any senior, but especially in a position group that is as blue collar as offensive linemen.”

George has rushed for more than 100 yards in four of Conway’s games, including 354 yards against Fort Smith Southside.

“When we heard that Mike ran for 350 yards, we were shocked,” Turner said. “I was proud of the o-line and how we were able to create running lanes for Mike.”

Speaking of the Southside game, it will stand out as a top football memory for Turner (and most likely for Wampus Cat fans for a long time to come). Trailing 20-7 at halftime, the Wampus Cats rallied to win 54-47 in overtime. What got Conway to overtime will always stand out to Turner.

“It was the most interesting game that I’ve been in,” Turner said. “I’ll never forget [senior kicker] Jordan Wicks coming in clutch with the field goal to tie up the game and sending us into overtime.”

Conway has shown marked improvement over 2016. With a fierce ground game and an aggressive defense, the Wampus Cats have proved they can play with the top teams in the state when they play clean football.

“We have determination,” Turner said. “At the end of the Fayetteville game last season, a lot of the players were determined to get better and have a better season. Going into the offseason, we knew that we had to get back on track and earn our name back.”

After riding such a high with the comeback win over Southside, Conway faltered last week at North Little Rock, falling 24-14.

“We played sloppy,” Turner said. “We didn’t have the energy and focus we needed to win the game. Offense had miscommunications and mental errors, making the defense have to stay on the field a lot more. It’s hard to win that way.”

Conway looks to bounce back this week against rival Cabot, a game that will be key to Conway’s success in the back half of the season.

“Conway versus Cabot — in my 17 years of broadcasting for Conway, the Wampus Cats have not played any other opponent more often than Cabot,” Matthews said. “Whether it was a conference game, non-conference game, playoffs — there is just something special about Conway versus Cabot. Cabot is who they are because of head coach Mike Malham. They are tough, they know who they are and what they do, and it’s been that way for a long time there.

“Conway will need to bounce back offensively this week. Michael George still had a huge game last week at North Little Rock, but we will need a strong effort in all three phases of the game to win against a Cabot team that is 4-1.”

“I want to perform as well as I can so that when the season ends, I’ll be able to say, ‘That's all I had,’” Turner said.