ESTES, CONWAY BACK IN TITLE GAME 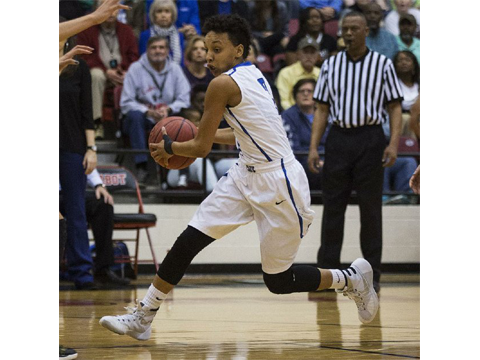 CABOT -- Hailey Estes couldn't contain her joy after Conway's 57-52 victory over Little Rock Central on Saturday in a Class 7A girls semifinal game at Panther Arena.

"I feel like a little kid right now," said Estes, one of two seniors along with Alexis Tolefree in Conway's starting lineup.

It was Estes' three-pointer with 14 seconds left that gave the Lady Wampus Cats a 53-52 lead, their first of the game in which they trailed by 15 points in the first half.

"I knew we were down. We had to come together and we had to be on the same page," Estes said. "Shooting all day in practice, it gives me the confidence to take that shot. That's what was going through my mind."

Estes' shot highlighted a 23-10 fourth quarter for the Lady Wampus Cats, who trailed 42-35 entering the quarter.

Despite the Lady Wampus Cats' deficit, Coach Ashley Nance had her team prepared for their biggest eight minutes of the season.

"We work on this situation quite a bit in practice," Nance said. "We always use the slogan, 'Stop, score, stop'. We're all saying that the whole time. Come on, we've got to get a stop. We have to get another stop.

"For these two [Estes and Tolefree] the last three years, that's been embedded in their brain."

The Lady Wampus Cats (30-1) are headed back to the Class 7A state championship game for the third consecutive season. They beat Fort Smith Northside to win the 7A title in 2014, but lost to Fayetteville last season.

Tolefree, a University of Central Arkansas signee, led Conway with 21 points, including 3 three-pointers.

"I feel confident in my teammates that we're able to go back to Hot Springs and do what we do best," Tolefree said.

Central was ahead 50-45 with 2:10 remaining, but Conway came back, as Maggie Evans hit a jumper and Lowe's three-pointer tied the game at 50-50 with 1:41 left. Kiara Williams, a University of Arkansas signee who led the Lady Tigers with 18 points, made two free throws with 1:06 left to give Central a 52-50 lead.

The Lady Tigers (26-3) couldn't hold on, as Alaysia Ready and Williams each missed two free throws in a 20-second span. Estes then hit the Lady Wampus Cats' biggest shot of the game.

"We're dealing with young kids," Central Coach Michael Green said. "Everybody has the utmost confidence in Kiara to make it a three-point ballgame. When she missed, I feel like my kids were kind of like, 'Dang, she missed.' That half of a second that it took to register that she missed, Conway was out and running and we're scrambling to pick up the shooter. Then No. 23 [Estes] floats out to the right, wide open."

Bre'Amber Scott had 16 points off the bench for Central, which lost to Conway and North Little Rock twice this season after starting 17-0.

Conway is in position to win its third state title and second under Nance, who has been at the Class 7A school since 2010 and is a daughter of legendary Guy-Perkins Coach John Hutchcraft.

"For us, there were a lot of people who thought we weren't going to have a good year. We lost six seniors. [Tolefree] is our only returning starter," Nance said. "We want to prove people wrong. There's something you get out of proving people that way. For us, making it there is an accomplishment. Obviously, we want to win. That would be icing on the cake."